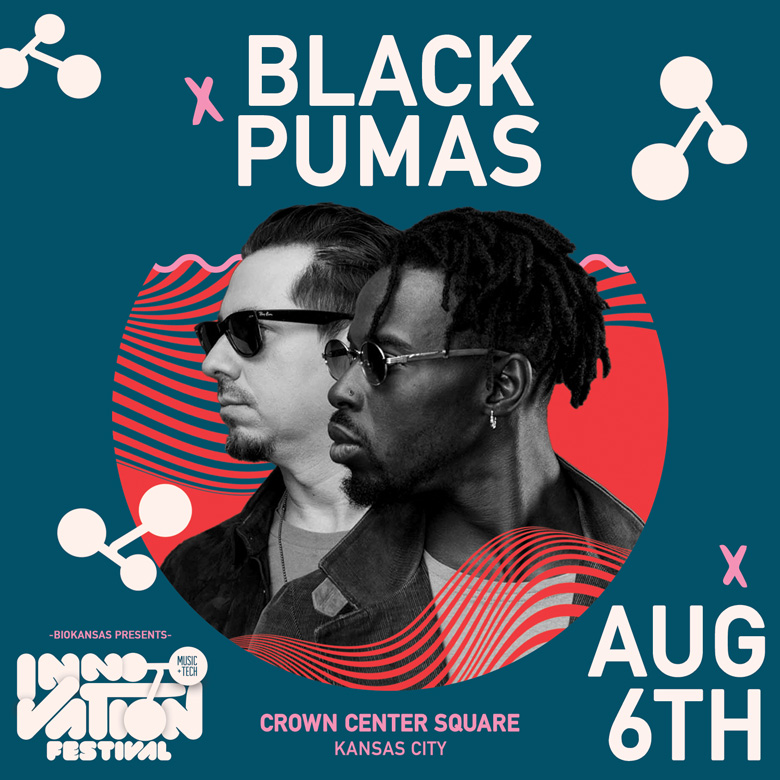 July 21, Shawnee, Kansas – The Innovation Festival concert series – a first for Kansas City – will hit the stage at Crown Center on Saturday, August 6 for a day of indie, alt-rock music. Hosted by area biosciences promoter, BioKansas, the music festival is set to raise the bar on the concert experience.

Organizers say the lineup features performances by some of the most musically innovative groups in the country, including the Grammy-nominated band, Black Pumas. The group, which headlines Innovation Festival on the main stage, has received acclaim in Rolling Stone, appeared on The Tonight Show Starring Jimmy Fallon, at the 2021 Presidential inauguration celebration and more. BioKansas President and CEO Sonia Hall says the concert’s indie genre aligns with the area’s reputation for innovation.

“This has been a long-awaited vision for our organization,'' said Hall, “Music brings everyone together and that’s what we want to do in the name of innovation for the area.”

Concert organizers have enriched the experience by raising awareness of some of the hottest bioscience topics of the day, including mental health, biologics, agriculture technology and more. Concert goers can learn more about what’s happening in these areas and more as well as the Midwest’s’ role in advancing life science innovation. BioKansas is leading the effort to build a biologics hub in the region, which is expected to generate economic, personal and investment opportunities. Hall says the hub will be a draw for early career scientists to work or train.

Tickets are available at the Innovationfestival.com website. With thousands of tickets already sold, officials expect a good crowd. This festival spotlights the Kansas City region’s reputation as being a vibrant and welcoming area to live, work, and grow the biologics industry.

“Get ready to rock and roll with innovation and bioscience,” says Hall. “It’s going to be a fun day for all of Kansas City to enjoy a nine-band concert series.”

BioKansas is a non-profit organization whose mission is to lead the effort of supporting and growing Kansas’ bioscience ecosystem including bioscience research, commercialization, training, and business development. Through organizational and collaborative efforts, they provide meaningful content, connections, and advocacy to advance the state’s bioscience industry. Learn more at www.biokansas.org.